A Path to Piety 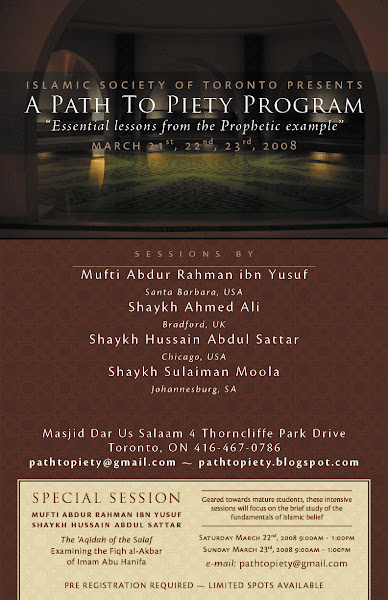 So I went through the pics from this year, and I have to admit, they're not as good as last years (which are still on my Xanga). It's all the broken camera's fault...

As promised, here are the pics taken on Eid-ul-Adha at the Farm (Sanabil Halal Meat Farm). The pictures aren't so good because the camera, which was once working brilliantly, now doesn't work so well. It fell after some kid knocked it down and ever since then the poor camera has been coughing up some not-so-good pics. Tomorrow inshaAllah I'll post up the RIS pics. Those too aren't the best pics but they'll have to do.

And the world becomes more desperate to save it's self from it's own oppression and kufr...

South Africa's new Sexual Offences Act includes a clause which could allow youngsters to be criminally charged for kissing or fondling.

Twelve to 15-year-olds fall under the new legislation, which covers acts that it describes as "consensual sexual violation".

Rights groups say the controversial clause, signed into law last month, should be seen to protect children, despite claims it is unworkable in a country plagued by far greater problems: not least of them, the rape of children...

All Comments
This blog is best viewed with Mozilla Firefox